After months of just poping in, and occasionally leaving a note, I think it's time to admit to myself that I'm uninspired by SimsVille at the moment.
It really breaks my heart saying this, because I really love SimsVille, but it's true :(

My last actual blog update was in June, after that I had the rebuild, which I was so excited about, but now I'm still stuck in the same place I was in December, and there's no progress at all!
I've played one family since the rebuild, but that's already months ago, and haven't actually played another one after that. I've loaded the game several times since then, and I played around with the hoods a little bit, but the spark just wasn't there. Some days I even loaded the game and closed it hours later without doing anything.

I don't want to quit playing the game, I love it too much, but I'm putting SimsVille on hold at the moment and I'm starting a new hood; for the first time in 6 years!
This new hood is called Linfort, it will go by allmost all of the same rules I had in SimsVille, but there are things in SimsVille I did wrong from the beginning, and stories I never told that were all in my head, and I'm going to try to avoid all of that with Linfort. I will start a new blog about Linfort!

As for real life, that hasn't been great since the beginning of this year. I don't think things will change much, but there's hope anyway.

I hope you'll all enjoy seeing/reading things about this new hood, and who knows, maybe this will spark me to start playing SimsVille again! I really am going to miss those sims :(

You can find the new blog here (http://linfortsims.blogspot.be/) - I hope to see you guys there!
There isn't much yet, but I hope to post the introduction of the first families later this weekend!

Thanks for the following all these years!

So it's been a while, I'm sorry. I have been simming, but there has been a lot of things going on IRL to make me focus on playing instead of writing updates.

The rebuid isn't done yet, but I'm getting there. I've created all of my playables, moved them all back in to their houses or build them new ones in case they needed one. All the house and apartments are furnished and decorated, and I feel quite good about that.
I let the families with babies have their babies again, made the sims pregnant who were pregnant, added the pets (since I was stupid enough to forget them when I created the families).
A lot has been done in SimPe as well, but not everything. I also need to recreate my dead sims, so I can do all of the relations, set all the relations and familytrees back in order in game, and get their businesses going again, but that will come eventually.
I have started playing again though! As much as I want all those empty spaces to be filled with lots, I started missing my sims, and really wanted to play again!
I'm having a lot of fun building and (re)decorating all these lots though, so I'll be continuing with that while I play.
And I'm still hoping to get my already played updates written and published as well as the lot tours, but that seems like a far away dream at the moment.

Anyway, in this update I thought I'd give you guys a tour of South SimsVille, to let you guys see what I've done the last couple of weeks. 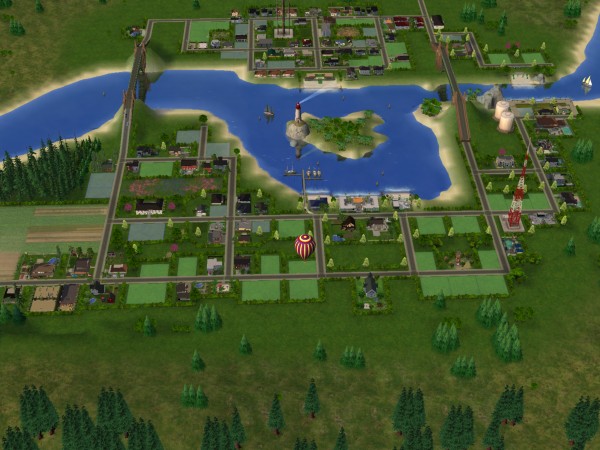 So this is SimsVille as it looks at the moment. The part at the bottom of the map is South SimsVille.

As promissed in the last rebuild-update, I'll be showing you a little bit more of SimsVille this time.
I'm still liking the terrain a lot! It's bigger than my previous one though, so it takes time to fill it. To be honest I don't think I have enough sims at the moment, and I know I have a lot of sims already. But it gives possibilies. 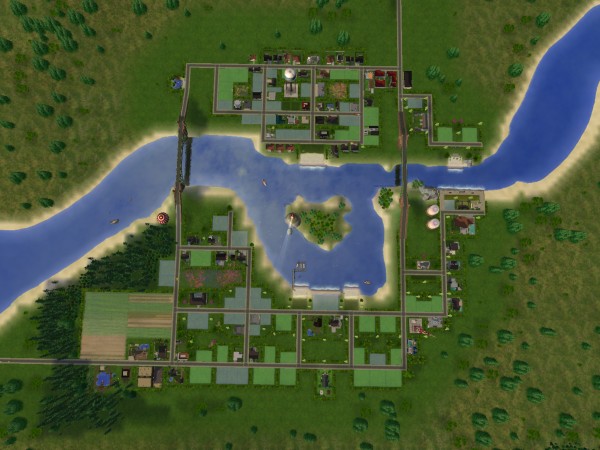 So this is SimsVille at the moment. The road leading out of the map on top is leading to Simmeria, the one going off the map on the left leads to DimSimTown (which I haven't even started yet).

Here I am with another update on my rebuild. My 3 weeks off from work started and I'm very much looking forward to progress with this rebuild so I can add my sims back. I miss the actuall playing!
As I'm typing this, I'm loading my game and I plan to add the first 2 families when it's loaded, I'm so much looking forward to that.

On to the hoods now. As I already thought I changed the terrain from Simmeria. As much as I loved that my armybase would be in there, it's just not happening, it was way too big to work with, at least for me.
So I went back to the terrain I had in the old hood, but changed things a little bit.

Before I give you all an update on this rebuild, I want to take minute to thank you all for the kind words and support. I know I haven't been around much. I haven't posted a real update in months, and I haven't commented on other people's blogs, or posted much on N99. Unfortunatly real lilfe has keeping me busy.
I've changed jobs 9 months ago, and I like what I'm doing now, but I think it's kind of tireing having to talk/think/write French all day, when French isn't my motherlanguage. I do think that's part of the fact I have been so absent lately, I just don't seem to find the energy to do any writing in English when I get home. I hope that I can adjust, and that in a few more months I'll be able to combine the 2 much more, after all it's not like I do anything productive at home when I'm home anyway.

I really do want to thank you guys for commenting even though I don't do that much lately. I really appreciate it a lot!

Now on the rebuid-update; one of the most exciting things about having to rebuild, is picking out new terrains! This was actually one of the things I was actually looking forward to!
I've been thinking about a new terrain for SimsVille for some time now, but never felt like replacing the terrain and re-organizing.

I think it's time to finally accept that I really need to rebuild SimsVille. I've been strugling with the pink flashing for some time now, and every time I thinks it's gone, it keeps coming back.

I thought it had something to do with the amount of CC I have in my game, which used to be around 17GB (I know I have a lot!), so I started deleting things, and it appeared that every time I got it under 16GB it was gone.

However lately it came back again, and I've been cleaning out my downloads-folder even more, I'm now under 15GB, and I keep deleting things, but the pink flashing keeps comming back. So I stopped thinking it was the CC, and started thinking the problem is the hood instead. And so I'll be doing a rebuild of SimsVille

I've been thinking about playing this last family before doing the rebuild, it's december in my hood, and so I'm almost halfway through my round, but my gave is pushing me in another direction.
I've been trying to do that the last month or so, and it's just not working.
Ussually I can play 2 or even 3 families during one weekend, if I have not much else do to, now my game hardly lets me play through 2 days without giving me the pink flashing. So finnishing this year is just not going to happen before the rebuild.

I admire Carla for what she has done by completely starting over with her downloads-folder when she started her rebuild, but I'm just not that brave.
So I'm going to keep cleaning out my downloads-folder, and I'll be rebuilding at the same time. I have to admit I'm not looking forward to it, but it has to be done.

This rebuild means there won't be much updates, and I'm aware that I haven't updated in months, but now you know why, I just kept thinking I could get it fixed.
I have some updates, that I still need to write, and I'll try to get them up so you'll at least see what my sims have been doing. And I'll also try to keep you guys updated with the progress of the rebuild. I don't if I'll have much time now, but I have 3 weeks off from work in September, and I hope to focus in this rebuild then, so I'll be able to get back to regular playsessions, and updates.

This rebuild also means that SimsVille will look different, I'm looking for other terrains for both SimsVille and Simmeria, because I got tired of the once I had.
It also means that some sims won't be living in the same houses afterwards, and for some families it's even possible they move from Simmeria to SimsVille of the other way around.
Some community lots might disappear and new ones will be build, ...

So I'm very sorry for the lack of updates lately, I hope to make it up to you when I get the new SimsVille going! 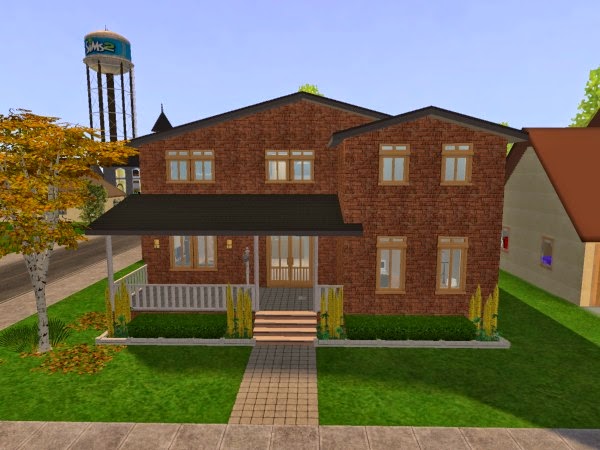 As promissed in their last update, here's a tour of Lawrence and Kenneth's new house. They had to take out a loan to be able to buy it, but it's worth it for them. The house has a livingroom, kitchen, study, 4 bedrooms and 2 bathrooms. 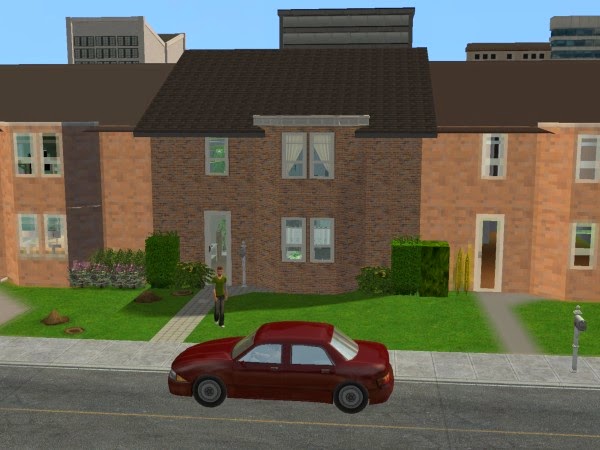